Iberian Lynx Where and how to photograph it?

October 18, 2021 0 comment
Photographing the Iberian lynxis easier knowing the secrets of its habitat and understanding its behavior. In this article we will delve into the problems in which the lynx has been involved, the places with more individuals and, of course, where and how to photograph it.

The Sierra de Andújar, the home of the Iberian lynx

The Iberian lynx, the ghost of the Andalusian pasture, has managed to make its way, despite having everything against it. This graceful and hypnotic-looking feline has found its salvation in Andújar.

In 2002 there were only 94 specimens left in the entire peninsula and the only population that had managed to avoid inbreeding resided in Andújar. At that time, all the mechanisms for the recovery of this species were put in place, which was classified as the most threatened feline in the worldwithin the Red List of Threatened Species, a document prepared by the International Union for Conservation of Nature (IUCN). Recovering the Iberian lynx has entailed a continuous and constant effort on the part of institutions, private farm personnel, biologists, neighbors and, of course, the economic injection by theLife projectof the European Union.

The predilection of the Iberian lynx for the Sierra de Andújar is mainly due to its diet, 90% of its diet is based on the rabbit. This mountain range covered by holm oaks, cork oaks, gall oaks and Mediterranean scrub, allow rabbits to have a clear view, making it easier to detect potential predators. This reason leads them to have a predilection for places such as meadows, steppes and, of course, for the Mediterranean forest. Additionally, to favor the settlement of the Iberian lynx, the reintroduction of rabbits in the area, previously vaccinated against diseases such as myxomatosis, has been promoted to avoid the decline of populations.

All the efforts made have yielded a result that exceeds the best expectations. So much so, that, in less than 10 years, 1,111 specimens were counted and there is no longer fear of inbreeding of the species. In fact, the Sierra de Andújar is home to the largest number of Iberian lynxes, managing to have 216 specimens and 76 cubs, data that indicate that the past, present and future of the Iberian lynx is linked to this enclave. 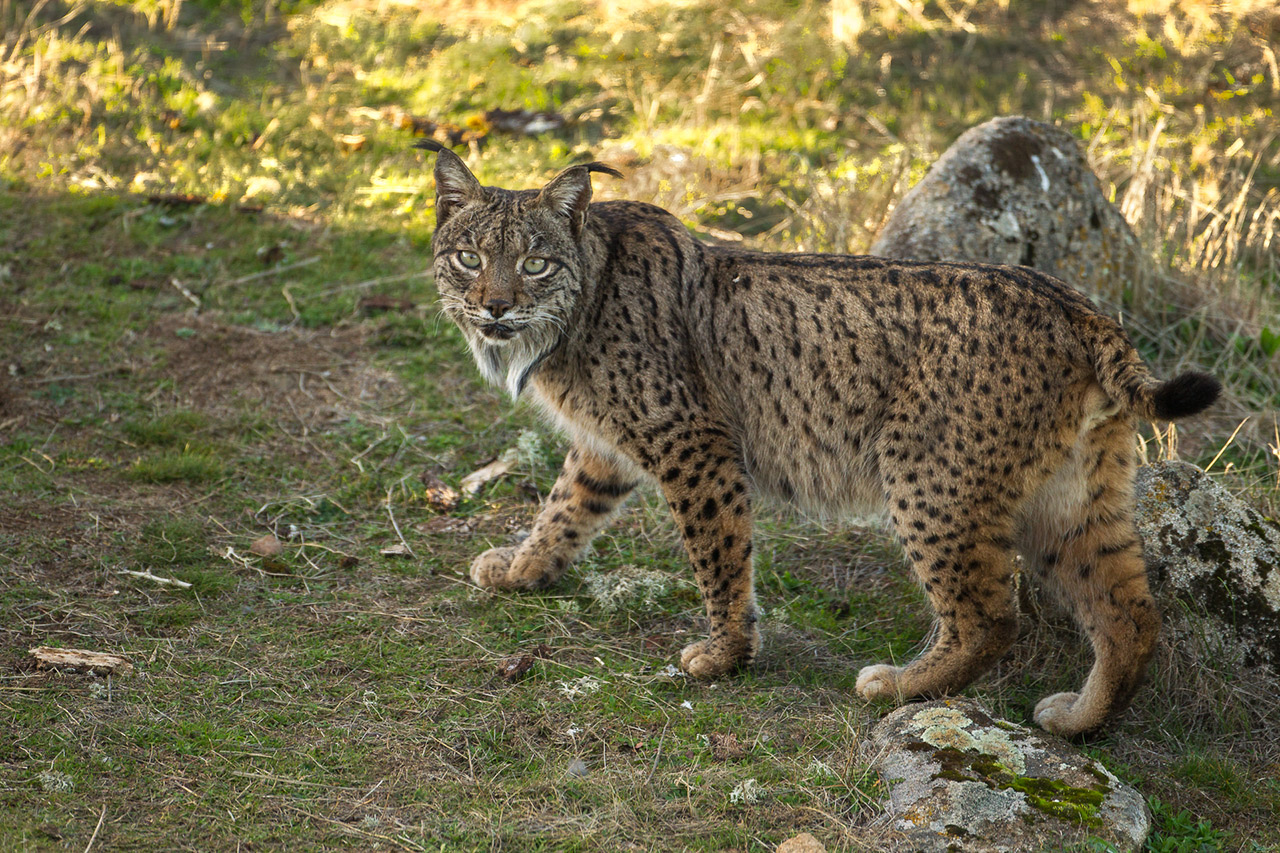 Where to photograph the Iberian lynx in the Sierra de Andújar

Finding an Iberian lynx is difficult, but if there is a place where it is relatively easy to spot it, it is the Sierra de Andújar. One of the most emblematic places to see it is on the Jándula road, 5 km before reaching the reservoir. This place allows us to contemplate a large area of the mountains and enjoy observing how the different species roam the area. Among them, the lynx.

One of the biggest problems to spot it is its fur. The lynx blends in perfectly with the environment, which leads to great difficulties in finding it among the bushes.

When is it easiest to find it?

The behavior of the lynx will vary in relation to the season of the year, being in the mating season (between the end of December and mid-January) when there are more possibilities of finding it. This is because the different specimens become more active and come out more of their hiding places to find a mate. In fact, it is not strange to see a male and a female, walking through the mountains or hear their meows to mark their territory.

In summer, due to the high temperatures, it is easier to find itat dawn and dusk, since the rest of the hours, you will find yourself napping, saving strength to hunt.

In autumn, due to the summer drought, it is a good time to find them around the ponds, drinking water and enjoying the cool of these places. Therefore, in ourhide of the pond, it is easy to see and photograph them. In addition, it is located in a privileged enclave, with bushes, bushes and plants that make it a magical moment.

It should be noted that the lynx is a twilight animal that comes out to hunt at dawn and dusk. Therefore, the best times to spot it is in those moments.

Peculiarities of the Sierra de Andújar

One of the most striking characteristics of the Sierra de Andújar is the high number of private farms. This has helped tomaintain its ecosystem, keeping the essence of the Mediterranean forest, a reason that has greatly helped the conservation of the Iberian lynx. Without the owners of the private estates, this would not have been possible since they have opted to preserve their presence with a clear unanimity.

However, the fact of being a natural park in which the mobility for the visitor is limited, leads to the Observation areas for the species are scarce, limited to the Jándula reservoir road, on the shore and around the Jándula river and the cork oak area. Due to this reason, to try to ensure as much as possible the encounter (taking into account that it is a wild animal and there is no 100% probability of seeing it) it is through a wildlife tour, such as the ones we offer at Iberian Lynx Land, since we have the permits of private farms to access and we have knowledge of the sightings and possible areas of passage of the animal.

What photographic equipment is the most suitable for photographing the Iberian lynx?

In fauna, it is very important to have quality equipment, since capturing the moment in fauna is very complicated and the camera has to respond correctly to the demands of the moment. In addition, if we add to the speed that the capture requires, that we can find ourselves in inclement weather, we have to opt for a resistant and decisive team.

The landscape of the Sierra de Andújar is characterized by marked lights and shadows. In addition, the lynx is a twilight animal, so we will have more opportunities to find it at sunrise and sunset, since it is the time when it goes hunting. This leads us to that on many occasions we have to shoot very high ISO, to be able to capture the moment. Therefore, the equipment must have agood dynamic range, so that, during processing, you can get the most out of the RAW file.

A powerful focus system. In fauna, getting the focus quickly is very necessary, since in many cases it will only be a few seconds that we will have to react and get the shot. In addition, the Iberian lynx has the great problem of blending in with the environment, so it is more relevant if possible to photograph this species. Currently, we find cameras on the market that allow focusing on the eye, being a feature of great interest in this discipline.

A camera with a good burst. Capturing that special moment, that unique and, perhaps, unrepeatable sequence is highly important. Along with the camera, we have to take into account the memory card. Not all cards record equally fast, so priority should be given to those that allow data to be recorded quickly

The resolution of the camera. Hardly, in open field, we find the lynx near us. Most likely, it will be at a great distance, which will involve a subsequent cropping of the photo. Therefore, the higher the resolution, the more likely it is to save the image.

On the other hand, the telephoto lens must be included in the backpack. The longer the focal length, the better. With a 300 mm we can defend ourselves in some situationsand, from a hide, it is a very versatile lens that will give a very good response. However, if we talk about open field, a 300mm will fall short, so it will be necessary to resort to 300mm with a converter or, directly go to a 500mm or 600mm. Fixed lenses will always give us greater satisfaction in terms of brightness, but that richness will be diminished by its lack of versatility, so the choice will depend on the criteria that the photographer wants to establish.

The tripod or monopodwill be a very interesting instrument, since it will help to stabilize the camera and, in times of low light, which is when we are most likely to see the lynx, it will be of great help to control the shot. At Iberian Lynx Land we have Leofototripods, which are very stable and of high quality and can be used by all our clients.

The hide of the pond is located within one of the private farms that have opted for the reintroduction and conservation of the lynx. This hide is framed in a unique space, surrounded by the plants that make up the Mediterranean scrubland and where the sun gives in an almost magical way, in which to experience incredible sunsets, in which the golden light bathes the pond already the species that visit it.

In conclusion,photographing the Iberian lynx is the dream of all wildlife photographers. This animal, for its beauty, for its feline grace and for its rarity, make it the jewel in the crown. If somewhere it is easy to find it, experience being close to it and know first-hand what it feels like to see it , that in the Sierra de Andújar